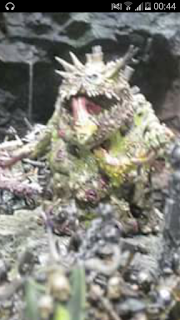 Long Time no see people! But I have just been sent this and couldn't refuse sharing it. Could this be the new plastic Great Unclean One?!
Posted by Servant of Chaos at 00:55 No comments:

Welcome to part 2 of my review of the new necron codex. This time ill be reviewing special characters, note this will only be Named characters in the HQ section. So no C'Tan or lord of war.

So he has dropped 35pts! He lost his orb and Phased Reinforcements special rule. He gained +1 to his WS & BS like all overlords. Adaptive tactics has changed so now he may pick a warlord trait each friendly turn replacing his current one Eternal Madness. From both the codex and rulebook! Thats quite game changing if picked right.

Counter tactics now allows you to gain counter attack, furious charge, hit and run, split fire, stealth and tank hunters if a unit with any of these rules are with 24".

Yea he is quite worth it.

So he dropped 40pts. Quite a hefty amount, so vargards duty is now he auto passes initiative test for glorious intervention. Meh. Cleaving Counter Blow is now only in a challenge and is at intiative step one, but there is no cap on how many bonus attacks he gains.

Ths ghostwalk mantle is now one use per game, its basicily the old veil of darkness. Obyron and his unit dont scatter if within 12" of Zahndrekh but not if he is in the same unit.

Hes not bad. Still quite a combat beast, mainly in challenges.

He went up by 10pts. He gained fear and lord of technomancy which means all units within 6" of him gain +1 to RP.

Mechanical Augmentation stayed the same. And now he is the only model with an Eldritch Lance. Which now has Lance!

Still awesome. Probably one of the best charavters in the book.

He dropped 45pts. Is a Master chronomaster so gives his unit +1 to RP and re-rolls of 1's. His staff of tomorrow is strength of user, ap2 and re rolls failed hits.

He goes into beast model if you roll less than the current turn and now stays in beast mode for the entire game!

Crypteks in general are looking like the most viable hqs.

Dropped 5pts. Has implacable conqueror, Pyrrhian eternals stayed the same. Mind in the machine is now 12" instead of 18" and on a 4+ instead of a 3+.

He went down 45pts, has the enduring will warlord trait. Surrogate host is now only characters, he now comes back on D3 wounds.

The Empathic Obliterator, is now +2 strength, ap4 and now if a character is slain in a challenge, all models of the same faction within 6" suffers a strength 4 ap- hit.

Hes still pretty decent in my opinion. Not bad but to use his ability to its full potention you need to have some throw away characters.

Posted by Servant of Chaos at 16:16 No comments: 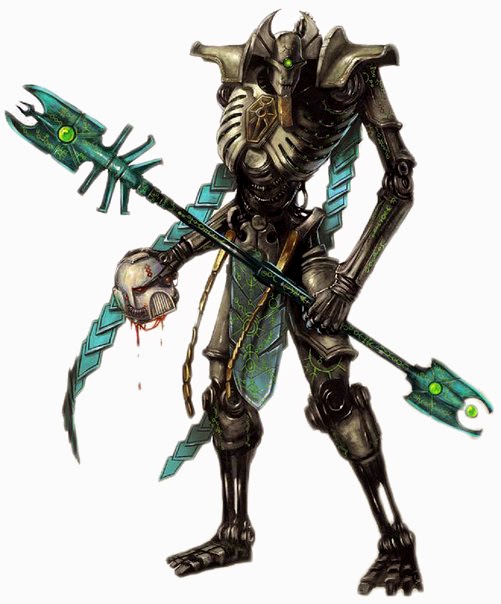 Right. I have had a enough time to drool over my limited edition Necron codex. So now its time to share my thoughts with you.

Reanimation Protocols:
Lets start with the big one, so before if a unit took casualties the models would be placed down, not removed. At the end of the phase you would make a reanimation protocols roll of a 5+ for each guy down unless the entire unit were removed.

Now its essentially feel no pain that cant be increased better than a 4+ and suffers a -1 penalty if the weapon causes instant death. If the model also has feel no pain then you must choose between them.

In my opinion Reanimation is much better now.

Living Metal:
It now ignores crew shaken results flat. But not crew stunned. And heavy and super heavy vehicles get it will not die 6+.

They have dropped 10pts but gained a better weapon and ballistic skill which is very nice. They also lost a bit in options. No more sempiternal weave, phase shifter is 4+ now. Orbs now longer worth points, and MSS got beaten with the nerf stick. Warscythes are 20pts now and lost ap1 but still one of the best cc weapons out there. Phylactery got better as now its IWND. Though different to the old one.

Think the way to run this guy now is in a decurion detachment on a barge, with Warscythe, Nightmare shroud, Phase Shifter and Phylactery.

They went up 40pts!! They no longer belong to a royal court and no longer have their funky weapons and upgrades. They and their unit get +1 to reanimation because of technomancer which is awesome, and for 25pts can take a chronometron for a 5+ invul against shooting attacks for him and his unit. He take items from Technoarcana and the Artefacts of the Aeon.

Definitly see these guys before must haves. Take the royal court formation in a decurion detachment. A good build i looked at was a Cryptek, with a chronometron, and solar staff in a unit of lychguard with Warscythe. So they are running around with a 5++ against shooting, a 4+RP, that if in a decurion detachment they will also have no matter what. And once per game for a turn your opponent can only snap shot at the unit due to the solar staff.

Meh. Meh. And yeah Meh. He raised 25pts and gained a wound. Takes up a valuable Cryptek or Overlord spot in HQ now. Unless you take the royal court formation. They alright if you just want either a cheap beat stick, or if you want a cheap HQ tax. But yea.

Crypteks are definitly without a doubt the star of he generic HQ's. Overlords are still smash you in the face awesome. Lords yea they are good just compared to the other two, theres not much competition.

Next I will be talking about Wargear and the named characters.

Posted by Servant of Chaos at 01:29 No comments:

Just a quick update to share my festiveness with you all.

I will be posting pics of my christmas hobby later.
Posted by Servant of Chaos at 07:09 No comments: 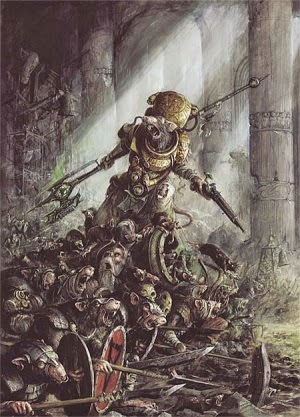 Via an Anonymous Source:

This weekends white dwarf teasers say something along the lines of 'they came from the underworld'.

Though this could be Necrons to, the underworld seems more of a skaven thing,
The Endtimes book 4 will contain skaven, with new models similar to Nagash and Glottkin releases. Then Necrons will be realeased last week of January/First week of February.
Posted by Servant of Chaos at 14:56 No comments:

via an anonymous source on Faeit 212
I have a bit of info in regards to the new campaign set.

While the date is currently unknown the forces within are crimson slaughter and dark angels. The idea behind the set is that you buy the Dark vengeance expansions plus the dark vengeance starter kit plus the campaign box and end up with all the required models to run any of the formations in the books.

No real idea on the contents as of yet asides from the chaos character being a sorcerer and the da having either a da specific tactical squad or 10 company vets. My source wasn't too clear to tell you the truth. Oh the dark vengeance story missions will also be a part of the campaign and reworked a bit to be used in regular games.
Posted by Servant of Chaos at 03:33 No comments: 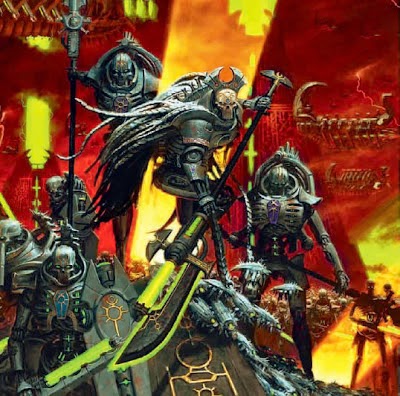 Over the last week we have been getting alot of rumours that Necrons will get their new codex before the end of the year.
well now we actually have some proof that those rumours were infact true or at least partially.

Above it looks like a new overlord on the new base size aswell. Looks like it could be part of the new trend of a new plastic character and three existing kits. Or maybe even the rumoured overlord kit. 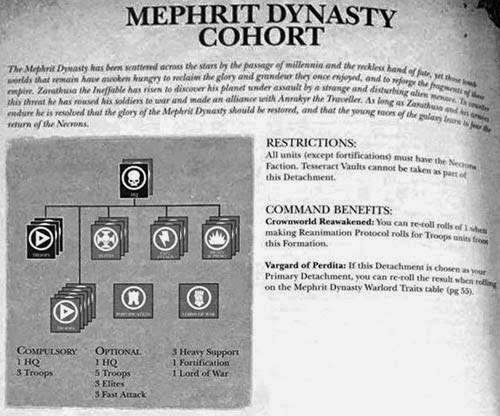 The Mephrit Dynasty were rumoured to be fighting alongside the BA. Looks like the new force org chart for them adding another compulsery Troop choice
Posted by Servant of Chaos at 11:08 No comments:

Email all hobby and rumour sources to
francospurs96@gmail.com 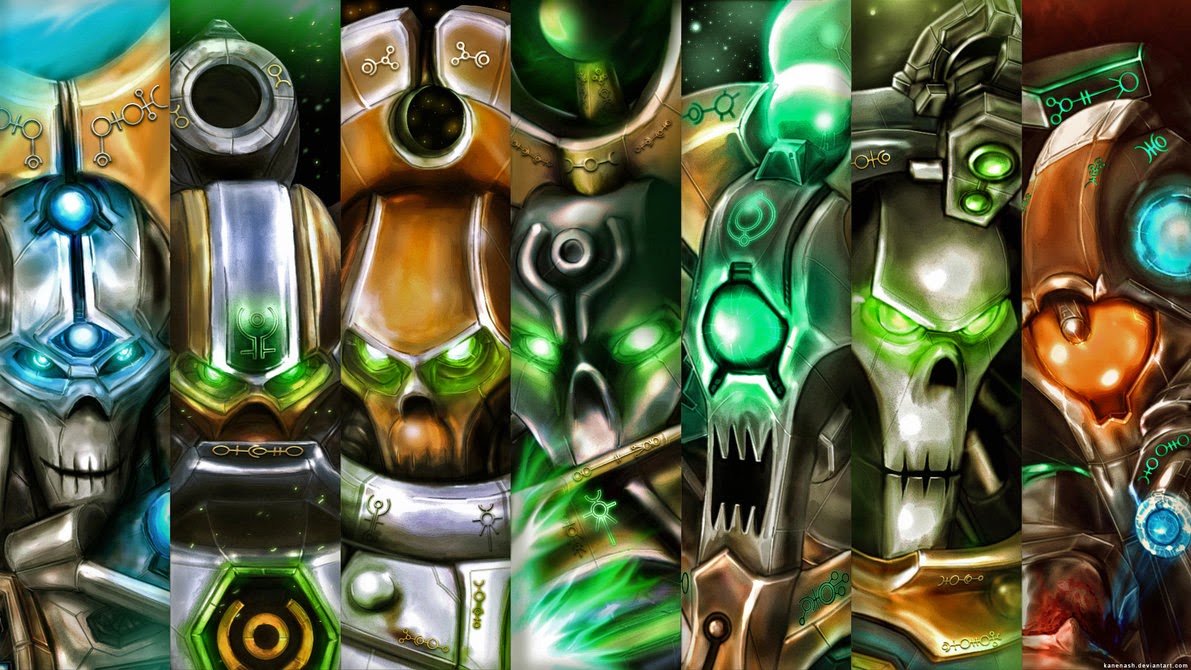